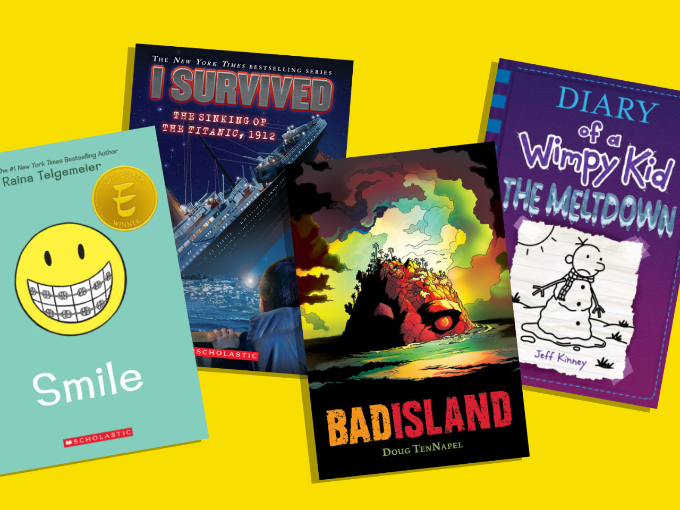 Bad Island by Doug TenNaple
What begins as a family vacation ends in an unexpected way when Reese is shipwrecked and ends up on Bad Island. This graphic novel is a riveting favorite for many middle school students.
Smile by Raina Telgemeier
A graphic novel (remember — they benefit reading skills, too!) that is somewhat autobiographical in nature, this book follows the author's story of what happens when her "dental drama" is compounded by normal middle school stresses. If your child loves this book, they'll also love Telgemeier's Sisters, Guts, and Drama.
Wings of Fire series by Tui T. Sutherland
Between its super-relatable dragonets to its core-shaking phrophecies and raging wars among dragon tribes, this series is on fire and a major trend in kids' literature right now. New books in the series include Wings of Fire #13: The Poison Jungle and the Wings of Fire Graphic Novel #3: The Hidden Kingdom.
I Survived series by Lauren Tarshis
This series follows fictional characters as they experience real disasters and historical events. The first book is about the sinking of the Titanic, and the newest one documents The Great Molasses Flood of 1919.
Big Nate series by Lincoln Peirce
Nate is not even close to being a perfect kid, which is why readers love following his adventures. Big Nate: In a Class by Himself is the first book in this fun-loving series.
Wonderstruck by Brian Selznick
Told by two memorable characters in two different ways — one with words and one with pictures — this book is a favorite of middle school readers and approachable for those still growing their reading skills. Set 50 years apart, the two mesmerizing stories weave back and forth with astonishing symmetry.
Diary of a Wimpy Kid series by Jeff Kinney
Greg Heffley shares his thoughts on middle school in his personal diary in this series. He is super funny, honest, and observant, and the handwritten font and doodles throughout will engage middle school readers from the beginning.